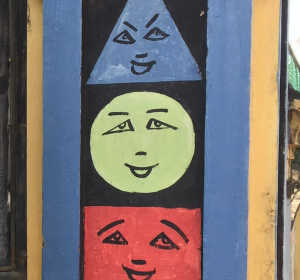 After a weekend of lounging on the beach and strolling around the city of Galle, on Monday it was time to actually start working on one of the many projects available to us. The first day we all went to the local elderly home where I spent the morning playing card games with elderly men and throwing a ball. It wasn’t until Tuesday that I saw the real importance of the projects this organisation runs.

Monday evening, we were all asked which project we would like to visit the following day and I chose the orphanage project. After being told no volunteers had been allowed there for almost six months and that donations hardly ever actually reached the children, I was intrigued to find out more about this place and how we could help.

So, the next morning two other girls and I got driven to the orphanage, which is a huge building housing children as young as a couple of months. Many of the children in this home are products of sexual abuse or families that cannot financially support them. For the slightly older children there is a pre-school where they can play and learn some basic information, but the group we were helping out with were the toddlers, aged two to four.

The younger group is housed in a separate building to the side of the orphanage. As we entered we had to remove our shoes, and looking at the state of the floor I was glad I had brought socks (previous volunteers have come back with bad foot diseases because of walking around bare-foot). The building is filled with rows and rows of small wooden cots with only a plastic mattress on the inside and no toys in sight. The whole room had a sad feeling of despair hanging over it and it was hard to keep smiling.

We were led to a corner of the room where about thirty to forty children were trapped in a pen. The area they had to play in was no more than 20 square metres and with nothing for them to play with, many of them were crying or screaming. The three women working there stood outside the pen, occasionally pushing children back who attempted to escape as if they were wild animals that needed locking up.

The two other girls I was working with were let inside and the children immediately flew at us, almost pulling us to the ground. Within the first couple of minutes a part of my trousers had been ripped off, I had been dragged down to the floor and my sunglasses had been stolen. These children were desperate for a bit of attention and were biting and screaming at each other to win a place on our knees. The whole experience was extremely overwhelming and it took a minute to realise what was happening.

Due to some problems with nappy rash last year, the employees of the orphanage refuse to accept any as gifts and the children just run around without. The floor is constantly covered in pools of pee that the children for some reason enjoy playing in, and trails of faeces are not uncommon. When this occurred one of the woman merely wiped it up with a towel, removed the child’s trousers and replaced them with a new pair. This makes the floor very unappealing to sit on, and it took a lot of willpower to let so many children climb onto my knee.

Eventually, we were all let out of the pen and went to play outside. Here there was a slide, two swings and a roundabout making it a little easier to actually play with these children who don’t understand a word of English. Within the group of children there were two autistic boys and it was a constant fight over who got to sit on the swing. There seemed to be no discipline known to these children and it took some effort to get them to understand the concept of sharing.

In a way, I felt sorry for the employees by the end of the morning, as they deal with a large group of children with hardly any help or essential materials (yet, this is the orphanage’s own fault for not accepting any material donations). Speaking to one of them, whose English was a little better than the others, she did know every child and understood their personality, but she didn’t have the energy to be there for each one of them the whole time.

For these children attention is essential, yet basic medical and hygiene protocols would improve their lives immensely as well. I only spent a couple of hours with these children, but the experience was overwhelming and opened my eyes to the importance of volunteers who are willing to offer up their time to give these children some much needed tender loving care.