2.45 am Thursday morning was the beginning of our journey from Galle to Jaffna. It was a trip I was looking forward to, hoping to see Sri Lanka from a whole different perspective. Jaffna is the capital of the northern Tamil territories and after hearing and reading about the civil war, I was eager to explore the birthplace of the notorious LTTE or Liberation Tigers of Tamil Eelam, and also to see the different lifestyles of Tamils compared with the Sinhalese culture in the south. Jaffna also used to be the intellectual capital of the country where one of the biggest libraries in Asia was located, before being destroyed in the civil war. 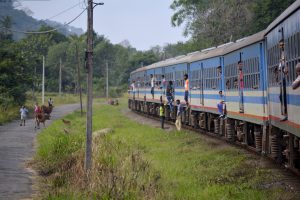 The train ride was long and it was clear the tracks hadn’t been replaced in a while. Every new attempt to fall asleep failed with unexpected jerks of the carriage, and each time the train stopped, the old rusted cars would crash into each other and shake us up even more.

The further north we got, the more visible poverty became. Some houses were only built out of sheet metal with fences made of palm leaves. The first sight of a fully destroyed house by the bombings during the civil war was shocking. But sadly, this was only our first of many meetings with what the war had left behind.

After an eleven-hour journey travelling 320 miles north, we arrived in Jaffna, with bags under our eyes and no secure place to stay. Unlike in Galle, not a single tuk-tuk driver approached us trying to sell a ride for a “special price.” Instead, we were scanned with suspicious looks. The hotel we ended up staying at was completely empty but had all we needed. It was an odd, dusty place right in the center of town. Tacky, broken lampshades, white tablecloths with holes in, paint falling off the walls; all reminders of a more glamorous time at the Pillaiyar Inn. Apparently it was the only hotel in Jaffna that didn’t close during the civil war and was used to offer shelter to families who had fled from the fighting and whose houses had been bombed. At first I felt out of place in this almost-dead hotel, but the house keeper, who was also an excellent chef, had a warm welcoming heart and surprised us with hot curries, delicious fried rice, naan and poppadums. Once again the Pilllaiyar Inn had given a bunch of lost people a place to rest.

Arriving in Jaffna felt like arriving in a different country. In Galle I feel welcome, safe, where life is comfortable and easy-going. In Jaffna, however, I felt like an outsider and unconsciously acted more cautiously. The streets were covered with rubbish and poverty was visible as far as the eye could see. Beggars lay next to the Hindu temples, there were fewer cars, more bicycles and many buildings falling apart. To give you an idea of the poverty and low living standards of the northern part of the island; we were able to get extravagant meals for just two Euros; a night in our hotel for eleven Euros; and a tuk-tuk ride, compared to Galle, cost only half the price.

emember how reserved the faces of the older passers-by were. After speaking with some of them, their individual stories helped contribute to the picture of this broken city. Many of the older men limped through the streets with what I assumed were battle injuries. They helped me realize how relevant the war still is and how much of a cost it was.  My expectations of encountering a different side of Sri Lanka had been met.

Yet some young men were curious of us white people and in particular interested in us girls. The smiles on their faces where joyful, and taking a picture of them made them feel like film stars. It was only one time that I felt nervous and slightly insecure, when my friend Kathryn and I walked down the main road by ourselves. Getting a tuk-tuk turned out to be more challenging than ever before and required a lot of courage and great endurance as most tuk-tuks just drove past us, leaving these two young, waving girls behind.

The rituals of Hinduism also play a major part in the daily life of Jaffna. The sweet smell of incense, combined with the smell of burning coconut shells in front of each shop, was constantly enveloping us and sticking in our lungs. Cows decorated with golden ribbons and flowers seem to rule the street life and control the traffic. They randomly wander around, exploring piles of rubbish, hoping to find their meal for the day. 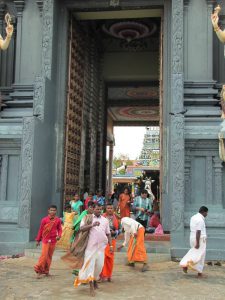 Visiting the significant Nallur Kandaswamy Kovil temple, the religious center of northern Sri Lanka, was the most amazing and unexpected spiritual experience. When we entered Sri Lanka’s biggest Hindu temple I firstly felt like a typical tourist wandering around another magnificent, colorful building. But suddenly I was captured. Between the sound of drums and the low harmonies of women’s chanting, I allowed myself to blend into the scenery by sitting down on the floor next to many other Hindus and attempted to follow their daily ritual. The ceremony was powerful, kept in motion by a synchronized flow of people moving from one shrine to the next. There were endless amounts of flowers, fire, music, and incense. When I left I had been brought down to earth.

Besides overwhelming landscapes, capturing ceremonies at Hindu temples and a vibrant urban environment, I was amazed by how lively the city of Jaffna was after years of fighting and fear. A journey that was more intense and eye opening than any school book that attempts to visualize the brutal impact of war on society. All in all it’s been a journey I would not want to have missed out on.